In honor of increased traffic thanks to the magic of MySpace (whassup
THMS, AADA, and Hunter peeps) and inspired by my planning of Winter
Trip 2006 (Chile!), I thought I'd update.  It's been less than 2
months, right?!

End o' weekend one in London was spent on the South Bank of
London.  After much debate, we ended up not seeing the Tower of
London (WTF, $30?!), but beautious photos are to be found in the
gallery: 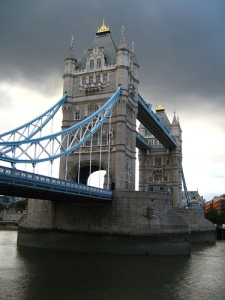 We wandered the very touristy but lovely South Bank and ended up having
dinner at Pizza Express, in honor of all of my much-beloved chick lit
heroines who drink lots of cheap red wine and eat pizza there.
Gotta say, it was pretty excellent.  Yet another thing Brits do
better than us: chains.  The chains are more customized to each
location, you get the uniform quality of the chain but a little
something different of each place.  Also, it was on the river and
the view was lovely:

After dinner, we walked across the bridge and had
some drinks at another massive pub near our hotel.  I was super
psyched to find Lamb's Navy rum, perhaps more evidence of my ancestors
(being both Lambs and navy members):

The next morning we checked out of the
Renaissance and took the only double decker bus of our journey to the
train station.  A little nausiating, but fun, though I am prone to
motion sickness. The ticket dude was a bit rude, undermining my
decision to buy single tickets to Brighton, and they were more
expensive than I expected from copious online research, but thems the
breaks.  This was the one and only time Husband was right about
Londoners being the Rudest People in the World (other than Parisians,
natch), but whatevev.  Journey was made more pleasant by canned
Pimms Cups and bacon sandwichs (secret to world peace?).

On the train to Brighton

This entry was posted in England and tagged booze, brighton, london. Bookmark the permalink.