As I mentioned before, everyone says you *have* to take a Black Taxi tour of West Belfast and the murals.  But H, averse to any thing that even hints at tour, was determined we could do it ourselves without a guide.  After some breakfast in the beautiful Great Room at the hotel, we went out to figure out what bus to take. The Belfast bus system is fantastic, all lines begin and end around City Hall, have easy to follow routes, and an all-day pass costs about $5.  Before getting on the bus, we did go inside to see the exhibit at City Hall, but missed out on a tour as they were in session.  Saw the Christmas tree light switch that Bill Clinton pulled when he visited Belfast (they, like me, are big fans of The Bill) and the building is lovely:

DSCF1467
Armed only with the vague idea that we should get to the Falls Road area to see murals, we got a bus to Falls Road and just got off when we saw a mural.  Easy-peasy.  For ease of posting and reading, I made a set of all the murals photos: West & East Belfast murals.

Falls Road is the Catholic section of West Belfast that has seen a lot of violence, but it's nothing like I expected.  Safe, working-class, sorta like Queens, even a bit boring.  We wandered into a cemetery, which was sad to see many who were killed very young in the worst years of the Troubles.  Some of the graves were like MENSA test questions: "Here lies our mother, Mary Rose, in loving memory by Jack and Shannon. Also her son, John Joe.  Also our uncle, Patrick Riley.  And my wife, Sheila. And our grandfather, John Joe."  Whaaa? 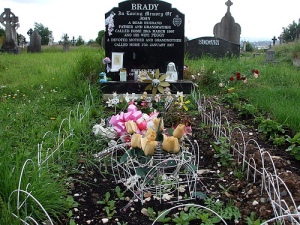 Most of the murals are pretty peaceful, mourning the lost or supporting other causes:

Pub on Fells Road (which had snugs!):

Had to explain the humor of this to H:

Without trying, we somehow stumbled onto the ironically-named peace line dividing the Catholic from the Protestant neighborhood.  They still close these things at night!

Peace Line, West Belfast
Despite the ever-present development all over Belfast, the Shankill Road Protestant/Loyalist area is far more depressing than Falls.  And more interesting: 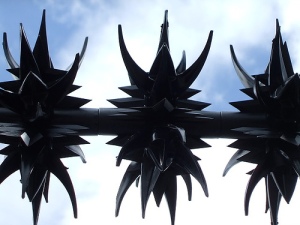 Shankill Road, West Belfast
The murals are a lot grimmer and more hostile, as well:

Shankill Road, West Belfast
At one point, we wandered by a large lot, filled with broken furniture and wood:

Bonfire, Shankill Road
As we stood looking at it and taking pictures, a Scottish minister approached us (he was wearing a collar and said "Have ye any English?", that's how I knew he was a Scottish minister) and told us about the wood.  Apparently, each July 12th, there is a large bonfire to commemorate the Battle of Boyne, victory by William of Orange over the Catholics.  It happened in 1690, yo!  The Scot said the piles would get much higher, and if you look it up on Flickr (belfast bonfire or july 12 bonfire), you will see that they did.  He told us about some of his parishioners, who had their homes damaged by the fire's smoke and heat, and how the peace line next to his (Presbyterian) church shut every night.  He told us about the "thugs" were celebrated as heroes by extremists, though he takes no side in the conflict.  Then the Scot told us all about his favorite Belfast guy, C.S. Lewis.  I learned more about the Troubles and C.S. Lewis standing on a street corner in Belfast than I ever could (or wanted to, in the case of C.S. Lewis) on a Black Taxi tour.  We might have been standing there all day but (thank God, no pun intended) the Scot had a meeting to get to, but invited us to come to service the next Sunday and he'd take us to lunch.  It was a Tuesday and we were leaving the next day, but it was a nice invitation.  I looked him up when we got back to send him a note, it turns out his name is Jack Lamb!  My maiden name is Lamb!  Small world!  Don't think I'm related to any Scot ministers, but neat!

We wandered a bit more of the neighborhood, which wasn't scary at all, but I wouldn't recommend to most tourists to wander there by yourself.  We're just hardcore like that, I guess.  Cool to see a mural being painted: 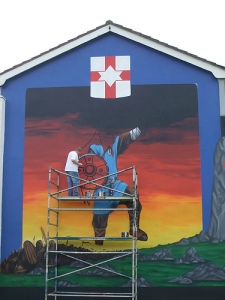 I think it was going to be something to do with Oliver Cromwell. Or maybe Vikings.  Or pirates!  Okay, maybe not pirates.

On that cheery note, I say good day sirs!

This entry was posted in Ireland and tagged belfast, murals, pubs. Bookmark the permalink.