We awoke in our wee bed at the Green Gate, hoping in vain for another gorgeous day.  The weather had been a mixed bag over our first week; usually rainy and grim in the morning but burning off and warming up in the afternoon.  After a lovely breakfast (one of the best of our trip and while I love bacon more than life itself, I got a bit sick of Irish bacon everyday) with a shell-shocked looking Swiss couple, I signed Paul's guest book, which is about the size of the Oxford English Dictionary composed mostly of photos and drawings sent to the Green Gate.  I had to reassure him that I would tell the gang at Conde Nast Traveler that his website has changed, and I'm glad to see that they got the right one.  He gave us some recommendations for beaches and drives to check out on our way to Sligo that were well appreciated.  After a bath in brown water (sign reads: "The water is brown.  It is normal." due to peat in the ground), an odd but not unpleasant experience, we headed into town to check out the tweed, which is what Ardara does best.

We didn't go to Eddie's (shown above), as he also runs a pub next door and was installed at the bar when we passed and we didn't feel like making him open up shop for us.  We did go to a large store and factory at the end of the main road in Ardara, whose name escapes me at the moment, but can be recognized by the large amounts of tour buses outside.  We went in and wandered around, and while the stock is very nice, hearing the employees give their well-rehearsed spiel to masses of tourists with their wallets open at the ready turned me off immensely.  We walked up the hill and ended up buying our Aran sweaters at Kennedy's, which had the best prices I found and a no-pressure atmosphere.  We headed to the coast, driving through gorgeous misty hills and valleys, past many sheep of course.   Here is a map of County Donegal, we were in region 4, on the westernmost side:

Donegal
Stopped in the little town of Glencolumbkille, where we were met by the
village idiot dog, who chased after us for ages, insisting we throw him
rocks and sticks to fetch on the deserted beach: 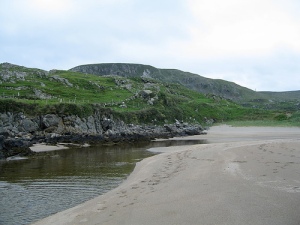 Gorge.  Moving on, we drove all the way to Malin Beg, which is even more remote and gorgeous.  We took a long flight of stairs down to the beach: 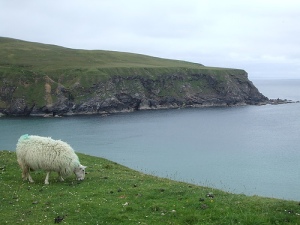 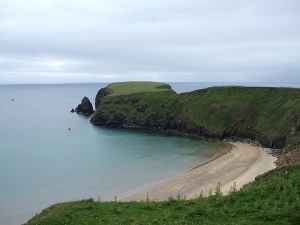 Just ridonculously beautiful but not that warm.   My forlorn bathing suit remained in my suitcase, tag still attached. e attempted to get closer to this structure to figure out what it was, but this was as close as we could get without incurring the wrath of rural farmers and sheep:

Last stop in Donegal was the Slieve League Cliffs, the highest in Europe, but not as well known as the Cliffs of Mohr.  To get to the top, you can either hike about a kilometer from the lower parking lot or drive a harrowing drive to the upper look out spot.  We opted for walking and when we got to the look out spot, I was amazed but ready to turn around and go back. Oh no, H was insisting we go up *further*, up the ominous One Man's Path.  Um, yeah, perhaps you're acquainted with my fear of heights?!  He suggested we just go as far as I felt comfortable, since we'd come so far.  It was misty, but the views were still remarkable:

I don't think we actually made it to the pass, as it is described as having sharp drop offs on either side and I don't recall anything that scary.  We did get pretty high up there, enough for me to sit clinging to the dirt, far away from the edge, while H took photos and I begged him to stop before he fell down the mountain and left me a widow, a la Auntie Mame.  The way down was scarier, but I made it without tears or hyperventilating, though I am trying hard to keep it together here: 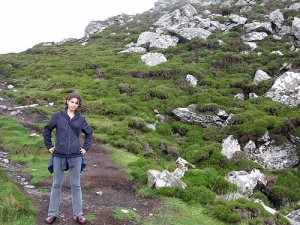 I will have to relabel this set of photos so that they have more information, we have a slew of beautiful shots from Donegal and Slieve League.  A word on my shoes: I had bought a pair of Dansko clogs for the trip, finding them practical but not hideous, despite H's snickers.  Anyway, I had tried to break them in the week before we left, but even a week into the trip, they were still making me walk in a way I can only describe as a pimp roll.  It turned out to be because of a small piece of leather embedded in the top of the shoe, which I still haven't bothered to get repaired.  I wore them anyway most of the trip, but seeing them again makes me wince at the memory.  Wow, that was a dull story.  Sorry.

On to Sligo next..

This entry was posted in Ireland and tagged donegal, scary, slieve league cliffs. Bookmark the permalink.