Abandon all expat fantasies, all ye who enter here 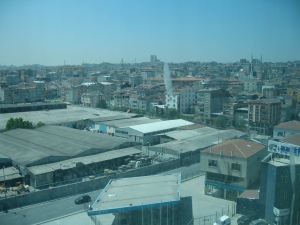 My current view of Istanbul

If you’ve been following my tweets or Facebook updates, you might know that since arriving in Istanbul, I’ve been living in an airport hotel. I wouldn’t say life here is hell (the hotel is nice and new, I don’t have to worry about cooking or cleaning), it’s more like purgatory. The current situation is that H is working at a client site near the airport and after spending his first week in the business district of Levent over in the new city and taking $50 cabs to and from work, he was moved out here until more suitable accommodations can be found. There was a possibility of moving to an apartment in swish Nisantasi (sort of the Soho of Istanbul, full of designer shops and upmarket restaurants), but it would mean a killer commute for H who is clocking 12 hour days for the foreseeable future and more outrageous cab fares. Finding an apartment in a more convenient neighborhood could take awhile, as Big Company has to handle dealing with multiple vendors to set us up somewhere; I can’t just go on Craig’s List and find something. We did discover a few viable neighborhoods this weekend in seaside Yesilkoy and Florya, but we are stuck at an airport hotel for what could be days or weeks, in the middle of nowhere Istanbul, relegated to the inconvenient hotel shuttle bus and taxis. Life right now is sort of like Lost in Translation meets Up in the Air, in a foreign language without subtitles.

Since I’ve visited Istanbul before in December 2008, I’ve seen the major tourist attractions already, and with my mother visiting next week and more friends coming at the end of May, I’m holding off on seeing them again or checking out any I missed on my first visit. Given that I’m so unsettled (I don’t even want to unpack until I know where I’ll be for at least a week) and without a permanent address, I can’t really do any of the neighborhood/moving in type of things like find my local grocery store, dry cleaner, cafe, etc (not that those things exist out here). Nor do I want to buy anything that I have to repack and remove. Basically, this leaves me with wandering around the city (once I can get into it), riding the transit system all over the place, and hanging out at the hotel. The hardest part of expatriation is realizing you can’t recreate your former life. Last Monday, I had lunch at Peter Luger’s, hung out with some of my favorite NYC writers, went to a few fun bars, and got all around New York easily and independently. Today I ate some questionable “veal” bacon at the breakfast buffet, wandered around an industrial neighborhood by the hotel in search of civilization (epic fail, just office parks and Turkish truckers gawking at me), watched Glee on a crappy internet connection that costs 8 euro a day, and pondered which alternate airport-area hotels would be slightly less grim. But it’s not all bad, this weekend I walked along the Bosphorus beaches, ate Turkish ice cream with a knife and fork, and found a park with lambs frolicking. In a few weeks, I’ll look back at this time and laugh, but right now I just want to cry into my çay.

More on my first few days to come (I have gotten out, I swear!), along with some pix.

This entry was posted in Istanbul move, Personal and tagged istanbul, move. Bookmark the permalink.

8 responses to “Abandon all expat fantasies, all ye who enter here”