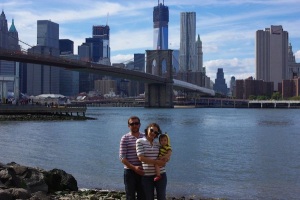 My family at Brooklyn Bridge Park, where we were married June 6, 2004.

If you’ve been looking for me on the interwebs, you might want to direct your browser over to KnockedUpAbroadTravels.com, or better yet, Facebook or Twitter.  If you’ve been wondering about all the Detroit links and thoughts about other cities I’ve been posting on those social networks, keep reading. We arrived back in Brooklyn on Labor Day, after a month of travel in New Zealand and South Korea, and over two years living in Istanbul. Since arriving back, in between trips to Target and IKEA (moving back into an apartment after a few years away is nearly as much work as moving anew), we’ve been pondering what’s next for us. Ideally, we’d be packing and planning for another overseas assignment, but as life rarely happens as you plan, we’re looking for a plan B as well as a new place to call home, whether it’s in between expat stints or for the long haul. My husband’s consulting job has moved from client-side to pre-sales, and he can now pretty much work from a coffee shop or from home anywhere in the US. Since moving abroad and having a baby, I’ve been working freelance in travel writing (need an article about Istanbul or travel with a baby? Email me) and public relations, and hope to stay more or less at home for a bit longer, especially  in a place where daycare isn’t on par with college tuition.

Perusing real estate ads and feeling a bit confined in our one-bedroom in Ditmas Park, Brooklyn, we’ve come to the conclusion that IF we a) sell our apartment with a decent profit AND b) I go back to work full time, we can maybe afford a decent two-bedroom and be slaves to a mortgage and exorbitant NYC daycare costs. OR we could move to Detroit (yes, Detroit, really). But before I get to that, here’s some background on what we are looking for in our next city:

The long answer for why we are thinking of leaving NYC (after nearly fifteen years for me!) are less tangible and harder to easily reconcile with just one (or any at all) city. They grow out of our experiences as expats, as well as parents, as well as people who are just tired of waiting in line for Trader Joe’s groceries.

Rather than make this any longer, I’ll save my thoughts about Detroit (and other cities) for some upcoming posts. For the record, in addition to Motown and Portland, OR, our short list includes: Pittsburgh, Miami, Denver, and Burlington, VT (though you might note not all meet our requirements, but we are thinking about them anyway). There might be others along the way, and there are others we’d love to consider like Philadelphia or Chicago, but feel we may be a few years too late to find something affordable and/or central. Would love to hear other suggestions. As it’s almost mid-November and we have nearly every weekend booked for the rest of the year (visiting family in Chicago and Raleigh, plus vacations in the Dominican Republic and Brazil), we are likely looking at a spring/early summer move, all the better time to put our one bedroom with patio on the market!