Our second day on LCI, we awoke early and finished the paper part of our PADI Scuba Course and learned all about the joys of BCDs and wet suits.  We then finally got into the water with all of the gear, where I unfortunately freaked out.  It was all so alien and weird, I’ve never even snorkeled and I tend to be a massive wuss anyway, so I sat the rest of the course out.  To my credit, I later got back in the water and did some basic exercises, but never had the chance to really dive.  H completed the course over the next two days and is now a certified Open Water diver.  But I highly recommend the great peeps at Dolphin Dive, for being so patient with my sniveling, scaredy cat self.

END_OF_DOCUMENT_TOKEN_TO_BE_REPLACED

Finally inspired to finish writing about Little Corn Island, though my tan is only a memory now.  Lessee, I talked about the not-fun panga ride and our stay at the Hotel Los Delfines.  On our first morning, we spent some time wandering the island, past the ever-popular summer camp for grownups Casa Igauna and other backpacker favorite places to stay.  That side of Little Corn has some lovely beaches and a neat-o abandoned resort that was perfect for escaping the sun.

END_OF_DOCUMENT_TOKEN_TO_BE_REPLACED

My posting has been curtailed due to a last minute weekend trip to Paris.  Yes, Paris at last!  Fortunately, I only found out about it late last week, so I was only able to obsess about it for a few days and then I was gone from Friday to Monday.  It was tres fantastique, photos and recap TK.  But back to Nicaragua…

We planned to head to Little Corn on the day after Christmas, which was good as there were apparently no boats or planes on Christmas Day.  I had stopped by the "ticket office" (I use this term very loosely) to find out about tickets on Christmas Day, and was told that I would have to pay a departure tax there and that the panga to Little Corn would leave at "about nine…or ten" (FYI, it leaves at 10 but get there at 9:30 at latest).  At any rate, it was at this ticket office that I had my token Rip Off Experience, that seems to happen to me on each and every trip.  The dude at the office told me to pay the tax, and I couldn't understand if it was 3 or 300 cordabas or what, but I had previously heard that the boat was $6 USD per person, so I gave him a $10 bill and waited for his response.  He said okay and gave me two receipts.  Naturally, I discovered seconds later that the tax is 3 cordobas per person, about 30 cents in USD.  Yes, I feel like an idiot, but maybe they will build a school in my name or something.

I prepared for the panga ride with some breakfast and a dose of Dramamine, and I am really glad I did.  After stepping into a tiny boat and getting a life jacket, they collect the fare (120 cordoba/$6 USD per person, just like I thought about the tax) and you're off. 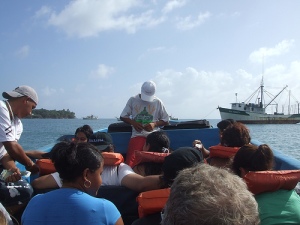 I was told it was a rather mild day, but the 25 minute trip was like the longest roller coaster ride ever. I stared at the horizon, clutched the boat for dear life, and prayed that I would not boot.  Periodically, the boat would ride over a big wave and slam down, lifting you from your seat.  Once, it slammed down so hard that one of the seats broke and they had to stop the motor briefly to fix it. Other people thought it was a whole lot of fun, but other people are stupid.  As Bill Murray said, "People like blood sausage too, people are morons."

I was still shaking when I got off the boat and didn't have the energy to fight with the enterprising young man who offered to walk us to our hotel, which I could see from the dock.  We stayed at Hotel Los Delfines, in "downtown" Little Corn, right in the middle of the action.  For $50 a night, you get a nice room with A/C, TV, and theoretical hot water in your private bathroom.  It's probably the most luxurious hotel on LCI and while it's not on the best beach, I think it was a great place to stay.  We met lots of people staying way over at Ensuenos and Farm, Peace, Love, which are on gorgeous beaches and very romantic, but they are a good half hour walk through the jungle to the main "street" of LCI.  As we saw these people every day and night, eating dinner and having beers near Los Delfines, I figured it was better to stay in the village and walk to the more isolated beaches if we wanted to.

Beach in front of Hotel Delfines
I will post tomorrow in more detail about LCI, but first I'll just say a little on the differences between Corn Islands, Little and Big.  Little Corn is much smaller and sweeter, with no cars or roads and even less development.  The beaches are beautiful on LCI, but many of them are staked out with chairs and hammocks from the hotels.  Overall, I think BCI was actually less touristy, as so many people go straight from the BCI airport to the dock, and that's not really the best face of Big Corn. LCI is more expensive, since it's harder to get everything, and there is less selection, but a few great places.  On Little Corn I met lots of gringos on permanent vacations; whereas on Big Corn, I met more people from Central America and more native-owned businesses.  This is not a criticism of the people on LCI, it's a lifestyle I'd love to have.

In some ways, it's like Manhattan vs. Brooklyn.  Most people come to New York City and go straight to Manhattan, without really bothering with the other boroughs.  Manhattan is smaller, more expensive, with plenty of people living such unusual/glamorous lifestyles you can't imagine how they sustain themselves.  Brooklyn is much bigger, with more restaurants and amenities, but many not as fancy or exclusive, and there are many more "native" New Yorkers.  This is obviously a major over generalization, but my point is, Brooklyn is pretty sweet too and you get a better sense of how New Yorkers actually live.  Such is Big Corn, I wouldn't say you should choose one over the other, but you appreciate Little Corn all the more after you've spent a day or two on the big island.  Especially  at night, where the lights of BCI look like Manhattan.  Damn, I've screwed up my metaphor…