Knocked up abroad: into the home stretch 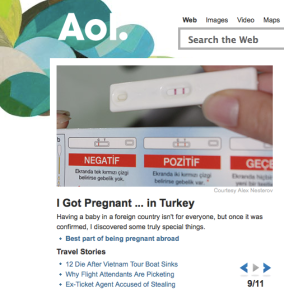 If you’ve been following me on any sort of medium that I update regularly, you’ll know that I’m expecting a baby here in July (just under 7 weeks away now!). H and I haven’t quite decided on what to call this baby girl yet, referring to her as Rasputina or the Young Turkess (though she’ll be as Turkish as I am, which is to say, not at all). I’ve been documenting the pregnancy on Gadling on a series of posts called “Knocked Up Abroad,” a name inspired by our favorite documentary series ever and conceived long before the actual baby. Here’s a recap of the posts so far:

As I head into the home stretch and don’t have any further travel on the horizon, I’m debating on what to post next. I’ll have plenty to share about childbirth and traveling with a young baby (we are already planning trips when she’s 6 and 10 weeks) but not for another few months. My third-trimester travel consists mostly of subway rides to the grocery store, though the Southeast Asia trip was right on the cusp of seven months. I’ve yet to do any actual baby shopping as I haven’t decided on what we need and it’s baffling enough for a first-timer, let alone in a foreign language, but that might come up. Also have been thinking about attitudes toward pregnant women and babies in various countries (Turks LOVE the babies, New Yorkers can’t be bothered to give you a subway seat and sigh loudly at the sight of a stroller), though I’m reluctant to start any debate after reading all the hateful comments on my first post. Anything you’d like to read about being pregnant abroad?